View All Press Releases
St. John’s, NL – The first of North America’s two longest submarine electricity cables has arrived in Atlantic Canada onboard the cable laying vessel the Skagerrak. Integral to Emera’s Maritime Link Project, these cables each measure 170 km and weigh 5,500 tonnes – combined, the two cables weigh more than the Eiffel Tower. The first cable was manufactured in Skagerrak_Argentia_NL_thumbnailHalden, Norway, while the second cable, which is expected to arrive in mid-May, was manufactured in Futtsu, Japan. 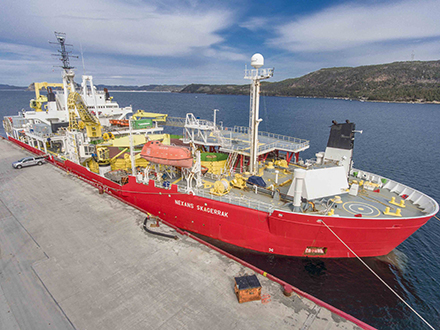 The arrival of the Skagerrak, operated by the cable supplier Nexans, marks the start of the submarine cable installation process. Over the next few weeks members of Nexans’ highly specialized crew will prepare for the installation of the first electrical connection across the Cabot Strait between Nova Scotia and the island of Newfoundland.

Throughout the various stages of the manufacturing process and transport of each cable, members of Emera Newfoundland & Labrador’s Marine Team have been monitoring and inspecting the progression to maintain quality assurance.

“The arrival of the submarine cables is the result of more than three years of dedication to safety and quality by our team,” says Rick Janega, President and CEO, Emera NL. “Throughout the manufacturing process, the successful testing phase and the transportation of cables, the team’s commitment continues to be the driving force of our success to date. This brings us another step closer to the completion of the Maritime Link Project later this year.”
Nexans used two facilities for cable manufacturing, allowing both cables to be produced at the same time. The cable manufactured in Futtsu, Japan, was spooled onto a giant barge in early April, and then loaded onto a heavy lift vessel (HLV) for the long journey to the Cabot Strait to await installation.
The HLV carrying the second submarine cable from Japan will take approximately six weeks to travel to the port in Sydney, NS. It will travel across the Pacific Ocean, through the Panama Canal and then up the Eastern Seaboard. Expected to arrive in mid-May, it will be loaded onboard the Skagerrak once the first cable is installed. Installation of both submarine cables is expected to be completed by late summer.

About The Maritime Link Project

The Maritime Link Project is part of a larger strategy to address the growing demand for more renewable energy in the region. It will enable the transmission of clean, renewable and reliable electricity from Newfoundland and Labrador to Nova Scotia.
The Maritime Link is a 500 MW high voltage direct current (HVdc) transmission project bringing clean renewable energy from the Lower Churchill project at Muskrat Falls to Nova Scotia. The Project will include two 170 km subsea cables across the Cabot Strait, with almost 50 km of overland transmission in Nova Scotia and more than 300 km of overland transmission on the island of Newfoundland.

Emera Inc. is a geographically diverse energy and services company headquartered in Halifax, Nova Scotia with approximately $29 billion in assets and 2016 revenues of more than $4 billion. The company invests in electricity generation, transmission and distribution, gas transmission and distribution, and utility energy services with a strategic focus on transformation from high carbon to low carbon energy sources. Emera has investments throughout North America, and in four Caribbean countries. Emera continues to target having 75-85% of its adjusted earnings come from rate-regulated businesses. Emera’s common and preferred shares are listed on the Toronto Stock Exchange and trade respectively under the symbol EMA, EMA.PR.A, EMA.PR.B, EMA.PR.C, EMA.PR.E, and EMA.PR.F. Depositary receipts representing common shares of Emera are listed on the Barbados Stock Exchange under the symbol EMABDR. Additional Information can be accessed at www.emera.com or at www.sedar.com. 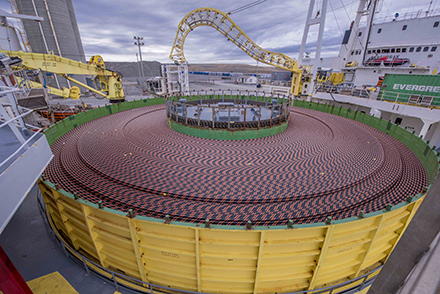 The first of two submarine cables for the Maritime Link Project arrived onboard the Skagerrak. Each cable is approximately 170 km in length and weighs 5,500 tonnes. Combined, both cables weigh more than the Eiffel Tower.

Nexans’ cable laying vessel, the Skagerrak, arrived in Canadian waters in mid-April with the first submarine cable for the Maritime Link Project. This vessel and its highly specialized crew will be instrumental in laying both submarine cables for the Project. 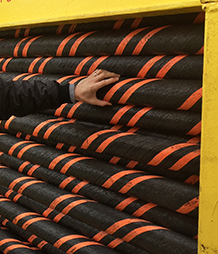 Each submarine cable is 10 cm in diameter (similar to a two litre soft drink bottle). 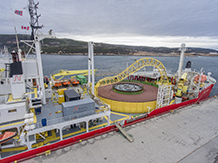 The first cable for the Maritime Link Project onboard Nexans' cable laying vessel, the Skagerrak.

A back view of the Skagerrak docked in Argentia, NL in mid-April 2017.